Have a problem to solve? Keep digging using The 5 Whys.

Uncovering the root cause of a problem is essential to solving it. Start by repeatedly asking “Why?”

Problems are a fact of life and of work. You can’t escape them, but you can learn how to deal with them promptly and effectively. That starts by identifying a problem’s root cause.

Unexpected problems can occur in any team or process, but they are symptoms of deeper issues. Unless you dig in to explore these issues and uncover what’s causing the problem, you may only be applying a quick fix—a Band-Aid. Quick fixes can be convenient but temporary, allowing the problem to recur and even get worse. Instead, focus first on finding the root cause. Then tackle it properly to protect your work, process, or team from recurring mistakes.

The 5 Whys is a root cause analysis technique originally developed by Sakichi Toyoda, the founder of Toyota Industries, and is widely used in Toyota Motor Corporation. It focuses on breakdowns in processes—not failures in people—believing that people fail most often when the process hasn’t supported them.

How does The 5 Whys method work? It’s deceptively simple. You keep asking “Why?” to drill down to the root cause of a problem. Once you know the root cause, you can then solve the correct, underlying problem rather than a symptom. 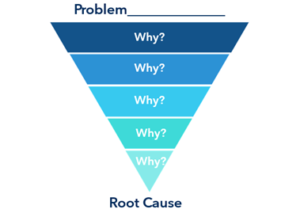 Let’s look at an easy example.

To begin, state your problem. Automotive engineer and inventor Charles Kettering once said, “A problem well stated is a problem half solved.” State your problem as clearly as possible.

Now you’re ready to ask “Why?” Each Why must answer:

Why #1: Create a short, concise statement of the reason for the problem. Make it simple for anyone to understand, even people not familiar with the operation where the problem took place. It’s OK to be basic; even if the problem seems obvious to you, it may not be that obvious to other people involved.

Why #2: List the technical reasons the first Why could have happened. This is a more concise explanation and could branch out into several different root causes.

Why #3: Transition from the obvious to the not-so-obvious. The first two Whys have prepared you to focus on the area where the problem could have originated. The last three Whys will take you to a deeper comprehension of the problem. Remember to focus on the breakdown in the process, not the people.

You may not be able to answer all the Whys at once. This is an investigation. Avoid jumping to conclusions or skipping ahead. Follow the thought process even though some underlying root causes may start to surface. The “logical” explanation may not be the correct explanation. What may have occurred that you haven’t considered? 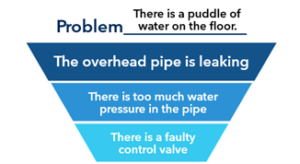 Why #4: Continue to zero in on the cause. Dig deeper to uncover the underlying reasons for the problem. Remember, even if you think you have a solution, that doesn’t mean you’ve found the root cause! 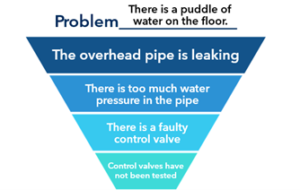 Why #5: Have you reached the systemic cause for the problem? When you finally get to the fifth Why, it is likely that you have found a root cause. However, don’t stop at 5 Whys if you find you are still dealing with process-related causes. Keep asking Why until the root cause is revealed. 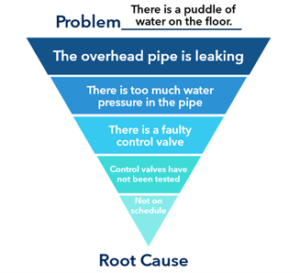 Finally, once you know the root cause, solve the problem. After you uncover the root cause (or causes), it’s time to take corrective action. All team members should be involved in the discussion to find and apply the best solution that will protect against recurring problems.

Think about what you could do, should do, and will do. When the decision is made, a team member should be responsible for applying the proper corrective actions and observing the whole process. Plan to follow up at a future team meeting to see if the corrective actions actually had a positive impact. If not, repeat the 5 Whys process.

A tool for every manager’s toolkit

Problem-solving is an essential management skill, and it relies on uncovering root causes. The 5 Whys is one of the most effective tools for root cause analysis in the Lean management arsenal. So put it to work! What problem is your team facing? Get to the heart of it by asking why.

How can we help your leaders and business excel?

Fill out my online form.

STAY IN THE KNOW

To receive occasional updates on our projects and news of interest (no spam, we promise!), please enter your email address.